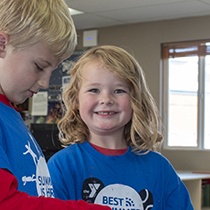 “My son Rowan is going into second grade next year, and he’s brilliant and hilarious, and he can’t really sit still. After a rough summer last year at home with his older brothers, we wanted to enroll him in a summer program. We had three things that were important to us—physical activity, healthy snack options, and minimizing summer learning loss.

We did some research and decided on the Eagle Y Kids summer child care program. Rowan was really scared the first day, but when we walked in, we were greeted immediately and shown around. I asked about breakfast and would you believe it, they had pancakes and blueberries for breakfast—Rowan’s favorite! “Mom! They have Legos!” He joined another child on the floor with the Legos and barely even noticed me as I kissed him on the top of his head and left.

He has never been super excited about school, but now he wakes up every day excited for summer at Eagle Y Kids. When I pick him up, he’s always happy to tell me about the new friend he made, new song they learned, or a new game he played. He almost ALWAYS has rosy cheeks, and my big mama heart just swells. He’s having fun, playing hard, and he’s tired at the end of the day. That’s exactly what we wanted for him!”
— Amanda